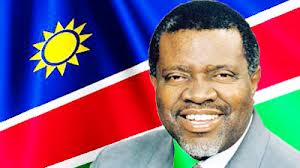 Just under two days after becoming SWAPO's (Namibia's ruling party) next presidential candidate Hage Geingob was reappointed to his old job as prime minister in a major Cabinet reshuffle announced by President Hifikepunye Pohamba. For Geingob it has been a vindication of his political career, which started in 1961 when he joined SWAPO and soon after became the party's voice at the United Nations.


Geingob was Namibia's first prime minister serving from 1990 to 2002. SWAPO has often been seen as a party in which cultural mandates sometimes over rule political ones. Geingob's desire to succeed first president Nujoma was often frowned upon and is believed to have played a major part in his sudden dismissal as prime minister in 2002.

It is based on the premise that Africa can grow only from within, but to do so it needs outside support. His focus was to work with African continental and regional organizations and Africa’s development partners towards conflict resolution in Africa, promotion of good governance in African states, and integration of African economies in the global economy.

October 2, 2004, Geingob, left the Global Coalition for Africa and returned to Namibia to participate in the November 2004 parliamentary election, in which he won a seat. Geingob became the Party Chief Whip of SWAPO in the National Assembly on April 18, 2007. He was appointed as Minister of Trade and Industry on April 8, 2008.

At SWAPO's 2012 party congress held in December, Geingob was re-elected as Vice-President of SWAPO, a result that is likely to make him the successor of Hifikepunye Pohamba as President of Namibia in 2015. President Pohamba appointed Geingob as Prime Minister on December 4, 2012.
﻿﻿
Posted by Unknown at 2:29 AM No comments:

The Auburn Avenue Research Library will host a screening of Food, Clothing, and Shelter, a documentary by local filmmaker, Ebrima Ba. The film examines how local communities in urban Atlanta are turning to African skills, tradition, and knowledge to find alternative ways to meet basic needs. Also documented are communities that provide for themselves through urban gardening, handmade clothing, selling handmade goods, and collective living. This event will be followed by a post screening community discussion facilitated by the filmmaker, Ebrima Ba.
Posted by Unknown at 6:25 PM No comments: