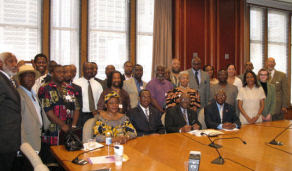 On June 9 2007, Odunde Inc held a business symposium cosponsored by the Mayor's Commission on African and Caribbean Immigrant Affairs. This well attended meeting presented the opportunity for local Philadelphia businesses to hear the investment proposals of several Afrakan countries. The countries represented were: Cote d'Ivoire, The Democratic Republic of the Congo, Liberia and Angola. Each Ambassador gave a presentation on their country's resources and potential investment opportunities.

The event was chaired by Mjenzi Traylor, Deputy Commerce Director for the City of Philadelphia and Stan Straughter, Chairman of the MCACIA. 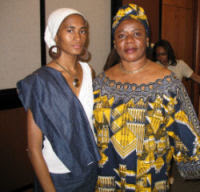 This event provided the opportunity for PKDG's Chief Operations Officer, Mangaliso Ture, and Administrative Manager, Sekayi Khita Hetep, to offer their ideas on alternative energy sources, water purification and hydroponics as outlined in their proposal for the Ta Neter Campus. we are proud to say we were very well received and hope to stay in contact with the representatives present.

Faida Maramuke MITIFU of the Democratic Republic of Congo, H.E. Daouda Diabate of Cote d'Ivoire, and Alexander H.N. Wallace, III, deputy chief of mission for the embassy of Liberia.