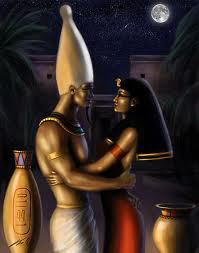 I love wisdom teachings, whether they be proverbs, stories or mythologies, because of their ability to convey deep thought in a way that truly penetrates the mind. Being told that you should control your emotions is rather flat, compared to hearing an epic story of a hero or heroine who, while traveling along through much adventure, faces colorful characters who challenge him/ her and prove that the only way to defeat them is to shine a pure light of energy from the heart… a light that our heroine learned how to wield along her journey… now that really drives the point home and even entertains in the process. My favorite wisdom teachings originate in Afraka, and are full of drama, logic, and consequences that enrich. 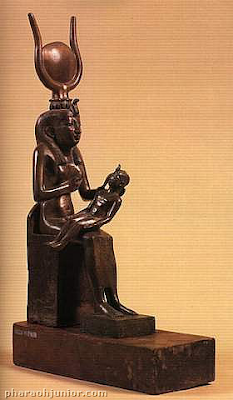 One of the oldest and most retold stories is that of the Ausarian Resurrection. In ancient Kemet (known today as Egypt) the gods ruled the land with wisdom and evenhandedness. The land was fertile and the people prospered. Presiding over Kemet, were Ausar and Auset, who's love was a thing to behold. As their love and national prosperity grew, they aroused the jealousy of Ausar's brother Set who conspired in the shadows to overthrow his brother and take the throne for himself. Through trickery Set manages to kill Ausar by trapping him in a coffin and throwing that coffin into the sea. Auset, queen and devoted wife, searches near and far for her husband's body, eventually finding it had grown into a tree in a far away kingdom. She is able to retrieve it and returns home with it to Kemet. Once Set learns of Auset's efforts he promptly arrives to put an end to her plans to revive him. Set chops Ausar's body up into 13 pieces and spreads these remains across the distant reaches of the world.

Auset collects all of the pieces save one, his phallus and returns home once again to Kemet. There, with the help of her sister Nebethet, she performs sacred ritual over his remains and calls forth Ausar's spirit.

Through their spiritual union a child is conceived...