Busy month, busy time. We had the pleasure of going to Amber and Idris' house warming in Germantown. Rasa Salon is now open for business in its new, beautiful establishment. Good luck to you both.

PKDG met with Judge Dougherty with the Point Breeze Civic Association in an attempt to have more children exposed to the Afrakaltural Outreach program.

The first Kwanzaa celebration of the season was held at Pearl of Africa on 12/13. Brother Ahmed and NAPU continue the annual cultural celebration in their unique style. There is always a communal, grassroots feel that lets you know they are on the pulse of the people. 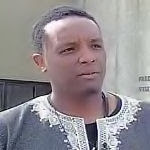 Egbe Sankofa Kingdom of the Gods of Afraka hosted the amicable Dr. Greg Kamithi Carr. His topic of discussion was Maroonage and its relationship to Afrakans in America today. Egbe Sankofa continues to be on the cutting edge of spiritual and cultural advancement of Afrakan people, and for that we are perpetually grateful.
Posted by Unknown at 1:00 AM No comments: 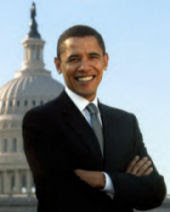 We'd like to say thank you to State Rep. Dwight Evans for hosting the election returns at Sadiki's Restaurant in West Oak Lane. The atmosphere was electric as expected. Sadiki's catered the event, allowing the city's political leaders and their constituents to dine free of charge in front of multiple large screen televisions. Of course the electricity of the night reached a crescendo when the words, "President Elect Obama" were heard. Once again, PKDG gives a heart felt thank you to the organizers of this event.
Posted by Unknown at 4:30 AM No comments: 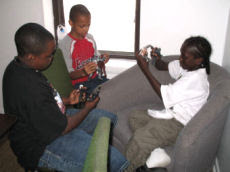 Our Afrakaltural Outreach Summer Program continues. This session was catered to young men from the South Philly area ages 7-12. They were actively involved in our modular training program which puts them through their paces. They focused on research and topography, both of which include heavy doses of reading and mathematics. Another winner for them was in iconography. 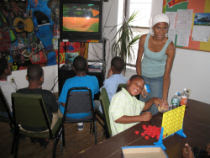 They had to model behavior of a hero of their choosing distinguish true heroics from selfish interests or things that conflict with the betterment of the community.
Posted by Unknown at 8:55 PM 1 comment:

The unfortunate postponement of Apotheosis Art and Fashion Exhibition - Futura MwAfraka was a disappointment. However the change comes as a result of our having decided to produce the show next year in order to maintain the standard our audience has come to expect. You can expect to see Second World Productions, Simply Netfah and Idris Designs as well as the art of David Lawrence and Baja Ukweli in 2009.
Posted by Unknown at 12:23 AM No comments: 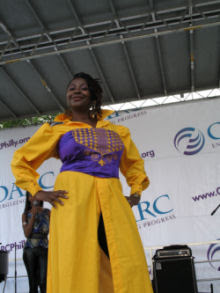 The Arts and Aesthetics Collective started this season at the West Oak Lane Jazz and Arts Fesival on June 20. The theme was Afrakan Masala: Rhythmic art and syncopated fashion expressed through improvised cultural stylings. The show featured the designs of Second World Productions, Natty Rebel, hair and makeup by Exavia's Locs and Twists. We also featured brand new art by Willis Nomo. The lovely Khenti hosted the show before the eager early attendees of the weekend festival. 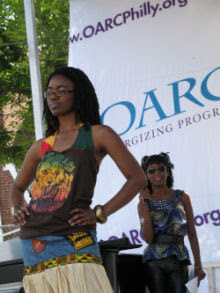 The Collective would like to thank Kelly Walker of Art Noir for his support and invitation to participate, Ahmed Tahir at Pear of Africa for contributing clothing, all of our beautiful models. Thank you to the dedicated and talented Feya and Ferugh of Second World Productions, to Natty Rebel, Exavia, Willis Nomo, and Khenti. Thank you all for another great show! 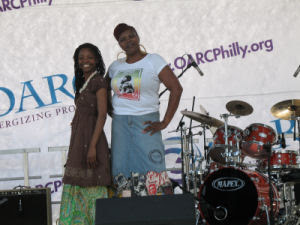 Afrakaltural Outreach to the Youth of Point Breeze 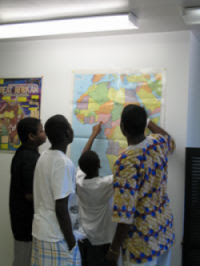 Point Breeze Civic Association has asked PKDG's Afrakaltural Outreach department to develop curriculum for their Little Leaders summer program. We are implementing age-appropriate portions of our Developmental Education Program designed to teach conflict resolution and anger management. Group activities are designed to foster leadership skills while team building lessons teach our youth how to work together for the benefit of the whole group. 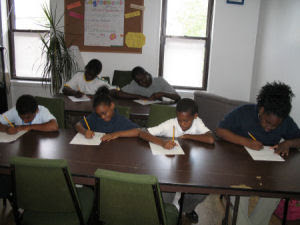 "The children of the Little Leaders summer youth program are diligent, bright and well behaved. They are receptive to and appreciative of our Afrakaltural approach, responding with eager curiosity toward cultural lessons which increase their self-esteem. They make it a pleasure to interact with them each week," says instructor Sxmt Sekayi. Atef Ture adds, "We hope to work with them further, in various capacities and environments with increasing challenges and team building missions."

Posted by Unknown at 3:21 AM No comments:

As always with Odunde our New Year's celebration began with a procession to the river in praise to Oshun. To us the spiritual and community connectedness consumates the reasons for this festival's existence. One minor hiccup, or major depending on your perspective, was the late arrival of KRS-1. As the ehadliner for this year's entertainment, KRS-1 was not allowed to perform, due to arriving almost an hour late. with only minutes left the city began to shut down the festival, thus curtailing any performance. Needless to say, many Odunde attendees were dissappointed. Due to the professionalism of founder, Lois Fernandez and daughter Oshunbumni the festival the crowd remained calm and concluded without a hitch.

We also had the pleasure of attending a fashion show at Wall Street, which is located in West Philly. The Wall Street complex is impressive in that it has two large buildings and a vast open air venue suitable for concerts and vending. Second World Production and Simply Netfah presented the two best lines in our "biased" opinion.
Posted by Unknown at 3:33 PM No comments:

"As artists of color blur the lines of specificity regarding ancestry and cultural experiences, personal reflections solidify a common bond through the variety of media and styles of expression. With paintings, drawings and mixed media, this group of artists make “Statements” that demonstrate and celebrate a myriad of life’s experiences, expressing historical, political, social and familial experiences."

For more on the African American Museum of Philadelphia-
aampmuseum.org
Posted by Unknown at 12:27 AM No comments:

Reparations 101 at University of DC 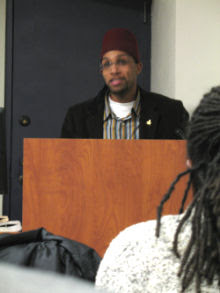 On January 24, 2008 the Univeristy of D.C.'s Reparations Study Club hosted the first of what will be a series of lectures on reparations for Afrakan people in the United States of America.

Brother Wautella defined reparations with conviction as "a process of repairing or restoring. It is the act of strengthing that which is weakened, to set right that which is wrong and to make flourish that which is insecure or undeveloped." He addressed the widely held belief that all Black people want is a handout by insisting that what is wanted...what is needed is social parity. Not necessarily a financial gift, but the creation of social institutions and scholorships that aid us in righting ourselves. 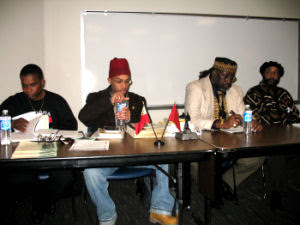 Bother Sabir, a self-declared Moor, eloquently and with detail described the processes needed for understanding the relevant codes of law. Sabir gave historical backgound on the active involvement of three of the most prominent figures in the history of self-reparations. The Honorable Marcus Garvey, Noble Drew Ali, and Elijah Muhammad worked togther to achieve this end, reprenting the three sectors of government -- Military, Executive, and Legislative.

This lecture was well attended and PKDG has invited all panelists to participate in a future Community Development Conference.
Posted by Unknown at 2:53 AM No comments:

PKDG in the Philadelphia Inquirer

It was cold, very cold, but that didn't stop PKDG from going out and supporting Peace Action Phialdelphia's first annual Ethnic Peace Festival, held at the Philadelphia Ethical Society. Though it was a small gathering, the dedication and sincerity of those present was more than just compensation. 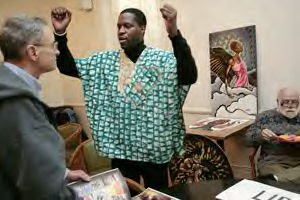 Peace Action Philadelphia board chairman, John Duesler, and executive director, Phyllis Gilbert reminded us how prevelant the spirit of the 60's still is today. We also want to thank them for supporting Fatou and Fama Restaurant and serving a tradional vegetarian African dish. Thanks also to The Philadelphia Inquirer for the coverage and a great spread. See you all next year. 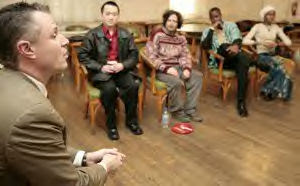 "On the eve of the national holiday honoring the Rev. Dr. Martin Luther King Jr., questions about the nature of peace drew a small but engaged group to the Philadelphia Ethical Society in Rittenhouse Square yesterday..."

To read the entire article - philly.com/inquirer
For more info on Peace Action - peaceaction.org

Posted by Unknown at 2:35 AM No comments:

PKDG was in good company as we attended a spectacular networking event hosted by Diverse Philly and Urban Philly on January 18, 2008. This upscale, professional event was held at Haru restaurant in Old City. Filled to capacity with, as one patron put it, some of the most beautiful Black professionals in the city.

Kudos to Nicole Newman of Diverse Philly and Sulaiman Rahman of Urban Philly for a job well done, this is without a doubt one of the best networking events we've attended. And beleive it or not, people were acually networking. We received several calls and emails from contacts met at the event. Can't wait for the next one. 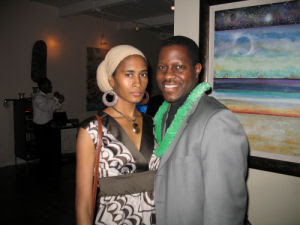 PKDG celebrated New Years 2008 (Gregorian calendar) at the studio of one of Philadelphia's most renowned artists, David Lawrence. Of course the bash was stylish, upbeat and well attended.

We knew David was a great artist, but he's also a damn good DJ. The music was soulful, jazzy, old school and new school. All of this amid the abstract Afrakan artistry and decor that is uniquely David.

Rumor has it, Apotheosis 2008 Art and Fashion Exhibition will be graced with Mr. Lawrence's artwork... Futura MwAfraka promises to be an exhibition to remember.
Posted by Unknown at 3:18 PM No comments: